The Threat of Cyber Warfare

The war between Russia and Ukraine displays all the traits of modern warfare. Along with the traditional military and economic methods, the tool of the threat of cyber warfare has put on high alert not only the governments of the two adversaries on the ground but also all those of the allied countries, with the United States in first place. In this article, we will explain what
cyber warfare involves and try to understand whether the United States is ready to face the threat of cyber warfare.

1. From conventional warfare to cyber warfare

On Thursday, October 28, during a wide-ranging speech, in which he sought to justify the invasion of Ukraine, Putin admonished the audience in the hall and everyone watching him through the eye of the cameras, saying that the world will face “probably the most dangerous” decade since the end of World War II.

The clear reference is to the short-term and long-term effects of the war that began in the spring, which involves not only the two declared adversaries but also the governments that support one or the other, along with an array of third parties who, in a recent interview, were described as “citizens of the world” by Jacob Galbreath, a member of the Cooperative Center for Excellence for Cyber Defense at NATO.

But what are these “citizens of the world” involved in? They are hackers, either isolated or organized in groups, who support one state or the other with actions that have devastating effects on the information systems and infrastructures necessary for a country to function. Indeed, the current war is not only being fought on the ground by traditional means, both physical and economic, but also at the cyber level, so much so that the threat of cyber warfare is a recurring theme on the agendas of vulnerable governments.

2. Is the United States prepared to face the threat of cyber warfare?

The country most concerned about this threat seems to be the United States. Considered a superpower both economically and militarily, it is questioning its preparedness in response to the threat of cyber warfare, which is being waged through innovative means and of which it is difficult to predict targets and the timing of attacks.

Doubt is widespread both among experts in the field and at the political level. During the spring of 2022, Michael J. Gallagher, Wisconsin representative to the U.S. Congress, stated that, “If the situation escalates, I think we will see Russian cyber attacks against our critical infrastructures.”

And how prepared is the United States to respond to the threat of cyber warfare? French expert Nicolas Chaillan has been working with the U.S. government since 2016 to assist in the effort to combat cyber crime internationally. In a recent interview , Chaillan said he is increasingly disappointed and regretful about the ability of the government to protect its computer systems, going so far as to say that America “is leading in terms of offense, but the defense capabilities are pretty weak, at the kindergarten level,” which means that the United States leads in terms of offensive capabilities, but its defensive capabilities are rather weak, at the kindergarten level.

2.1 What makes the United States so vulnerable to the threat of cyber warfare?

According to Chaillan, the problem lies in the fact that it is not only the internet infrastructure of the public administration that is vulnerable but also the private one, which consequently represents an additional entry point into the U.S. for hackers and, given the size and importance of certain U.S. conglomerates, a highly sensitive target in some areas.

In fact, many companies that provide critical infrastructure support for the United States have initiated digitization processes in order to make their systems accessible from the internet because they do not have enough specialized personnel on site to perform the maintenance necessary for updating and keeping the systems running properly.

If, on the one hand, remote access makes everything easier, it also becomes a carrier of greater cyber risks. One example is the May 2021 attack on the Colonial Pipeline, the largest pipeline that transports fuels between Texas and the east coast of the United States, and which we have discussed in more detail in this article, which can be accessed for free on the FlashStart blog.

>> FlashStart’s DNS geo blocking allows you to block all internet traffic from dangerous countries and, thereby, ensure the security and the longevity of your business → Try it now!

2.2 Attackers are already in many systems

What is most disheartening to industry experts like Chaillan is knowing that attackers have already penetrated many of the computer systems that are considered critical to the proper functioning of a government.

In the case of the United States, Chaillan even states, “We know there are plenty of instances where both China and Russia have been inside US systems for months, if not years. In fact, they’re probably inside of many of the critical infrastructure systems right now, as we speak.”
.
This means that Washington’s geopolitical adversaries are within the American systems. But which ones, exactly? It is unclear. They often remain silent for long periods of time, collecting data and documents and waiting for the right moment to launch an attack, with devastating consequences.

However, going back to Jacob Galbreath, mentioned at the beginning of this post, we can also note some positive points. According to Galbreath, in fact, the war between Russia and Ukraine has shown the true capabilities of Russia in terms of warfare, but it has also highlighted its limitations. This is both in terms of more traditional conflict operations as well as in terms of the threat of cyber warfare.

Another aspect revealed by this war is the pervasiveness of attackers. Attacks and counterattacks, in fact, come not only from Russia and Ukraine, but also from a wide range of third parties whose origin is known more or less. The “citizens of the world,” mentioned at the beginning, are an example, and, although they add an element of uncertainty to the context, in some cases, they also become the bearers of good deeds.

Finally, there are systems and tools today that have the express purpose of safeguarding networks and infrastructures from the threat of cyber warfare and that, in some cases, have also been developed with the specific goal of confronting cases such as these, in which the greatest number of attacks come from traceable sources. FlashStart’s DNS filtering is one of these essential tools against malware and unwanted contents. 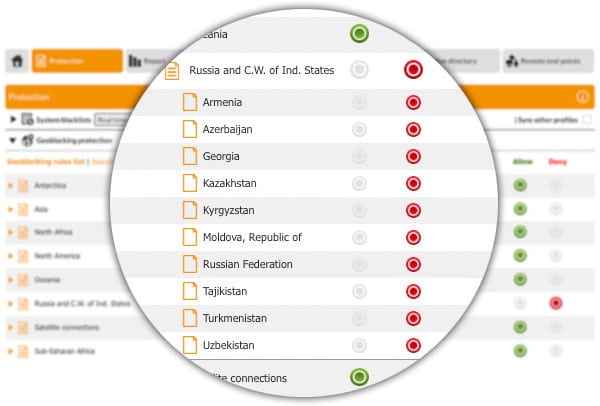 3. FlashStart: the DNS filter for combating the threat of cyber warfare

FlashStart makes a DNS web filter that allows the user to block dangerous and unwanted contents in order to avoid being the victim of the next cyber attack. The FlashStart content filter is based on lists of sites for which access is systematically denied by the tool. They consist of sites linked to the spread of malware and phishing attacks, but also other types of attacks, such as DDoS and botnets.

FlashStart has also developed a unique feature: DNS geoblocking. This is a feature that allows it to block all sites that can be traced back to servers physically located in countries that are considered to be high risk from a cybersecurity standpoint.

Which countries are we talking about? Well, in theory, the network administrator can decide to block the contents from any country in the world, but, obviously, some countries come to mind faster than others, and these also include Russia.

FlashStart’s content filtering dashboard allows you to easily select the countries to be blocked through the DNS geoblocking feature, leaving the selection of countries up to the decision of the network administrator, either one by one, from a list organized into macro groups, or even from an entire macro group of countries.

Filter solutions software: how to avoid being the victim of the next data breach
FlashStart: the content filter that is ideal for Fritzbox routers
The best web security software in the era of Digital Transformation
Blocking sites: the way to a safer and more productive Internet experience
Our Spring Sale Has Started