The term DNS Intelligence is a topic of great interest to the most
farsighted IT experts who work in the area of Cyber Security.
Therefore, we will examine the following related topics below.

What is DNS Intelligence, what exactly does it mean?

The English word “intelligence” has two common meanings.  The first one means “intelligence,” understood as the ability of the brain to make complex choices, extrapolating the acquired data.  The second, metaphorical meaning has to do with the “decision-making apparatus” and the relative investigative agencies which the state organizes in order to prevent problems, like crime, or to supervise common interests, such as financial operations.

Disregarding the reason why someone prefers to partner with DNS, essentially, the meaning does not change:  DNS Intelligence is a procedure which leads to a choice for resolving, or not, certain domains, using DNS protocol, based upon acquired information, after having analyzed, monitored, and cataloged the type of activity online

Over the years, the evolution of cyber crime has increased at the same pace as the growth of information technology.  Just as with virology in humans, Cyber Security in technology also can no longer limit itself to “curing” with a simple antivirus.

It cannot even foresee which threats will be created in the future so that it can create remedies in a timely fashion.  Instead, it can try to prevent attacks and infections, blocking the “contact,” that is, the visiting of dangerous sites.

There are approximately 320 million registered domains in the world, and almost 32 million more each year.  Not all of the sites correspond to sites online.  However, every site requires a domain.  From this perspective, DNS Threat Intelligence, that is, DNS Intelligence focusing on threats, is the most effective security tool.

Blocking dangerous domains is a pursuable goal and more effective than filtering the urls, because every domain involves an investment, and, therefore, it is more stable than a url, which can be continuously modified without costs.  However, advanced analysis and classification power, like FlashStart, is needed, as we will see in detail.

The word “intelligence” generally means procedures of rational and analytical choices but not automatically the idea of Artificial Intelligence.

The current state of the web rules out the possibility that, in the case of domains, effective DNS Intelligence can be done without AI.

In fact, the most recent data confirm that almost 5 billion people in the world spend an average of approximately seven hours a day connected to the internet.  The only solution that can guarantee secure browsing is an automated process of analysis of the domains, with a high capacity for cataloging, known as DNS Machine Learning.

In fact, no human device would be able to examine and decide, in real time, if requests to access the internet involve dangerous or inappropriate sites.  Through advanced  DNS Machine Learning tools, it is, instead, possible to analyze the contents of the site, their behavior, and the warnings about them, so that they can be cataloged in a detailed manner and blocked if requested by the user.

The Artificial Intelligence which supports FlashStart’s platform is especially high-performance in relation to DNS Machine Learning and, consequently, also in DNS Intelligence. In fact, it boasts a predictive capacity of about 92.5%, which means that, out of 1000 analyzed sites, 925 are correctly cataloged.

The remaining 75 sites include those in unintelligible languages, those with incomplete contents because they are in the process of being created, etc. In any case, it is practically impossible for these residual sites to be able to solicit or to make anyone commit actions that are compromising to the individual without being noted by Artificial Intelligence.

Even if it should occur, the site would be blacklisted at the first warning. Over 190 million sites have already been surveyed and ascribed to one of the 85 categories used for system blacklists for DNS Intelligence.

AI examines approximately 40,000 new domains per day, in addition to the various reviews and warnings, in order to continuously update its own survey. Cloud-based filtering subsequently intervenes and blocks DNS resolution in case protection is enabled and that category is blocked in the settings.

The blacklist is not necessarily about malicious sites. For example, the web administrator of a company may block access to online games and social network sites, simply to avoid distractions during the work day.
Technological advancement in DNS Machine Learning and the extent of the personalization of the filter are the two variables greatly related to the precision of DNS Intelligence, and, today, FlashStart is among the most accredited solutions in the world.

On the contrary, the first softwares with the ability to block DNS from installing and periodically updating on every device have now disappeared because they did not keep up with the cloud solutions supported by AI.

We have seen that DNS Intelligence monitors browsing at the level of undesirable contents of any kind.  The first ones which one tries to avoid are obviously computer threats, hence the most specific activity of DNS Threat Intelligence.

The hacker attacks of the new millennium are much more insidious and dangerous.  They even manage to infect with malware and compromise the entire corporate network

through Wi-Fi connected memory devices, like, for example, printers, webcams, and IOT devices.

All this confirms that perimetral protection is not enough, while a cloud solution like FlashStart is optimal because it is precise, stable, fast, easily integrable and customizable.   DNS Machine Learning is programmed in such a way as to analyze and recognize sites that invite suspicious actions which could end up with the installation of malware, soliciting, data theft, etc.

At the same time, Artificial Intelligence checks the warnings on public blacklists, web reputation analysis sites, and anything that helps refine domain rankings.

That way, FlashStart’s DNS Threat Intelligence proves to be especially useful because it blocks, from the start, the resolution of malicious pages and resources, protecting the user who might unknowingly follow a scam browsing path or receive an infected link.  Malware, ransomware, botnet, phishing, spyware, etc., are all containable from the start if DNS Intelligence has advanced features in threat detection, such as those implemented by FlashStart.

FlashStart filters about 5 billion DNS requests every day in more than 140 countries. It blocks resolution about 340 million times, and, among these, about 21 million involve malware threats and fraud.

The benefits of DNS Intelligence in different areas

We have just seen the billions of operations which the FlashStart platform performs every day to protect its users in the world.  If we want to delve into the areas where this is most useful, we immediately realize that DNS Threat Intelligence would suit any organization, from a large enterprise to a family, from a state agency to a single individual.  FlashStart is especially able to protect remote connections the same way, installing the Client Shield app.

A tool unique to FlashStart is geographically-based protection, which is the ability to completely block the resolution of all sites on servers in countries with high malware risk and compromise.

Finally, hourly monitoring of contents that can cause distractions (games, social, etc.) is very useful for optimizing efficiency in work and teaching. 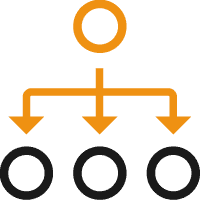